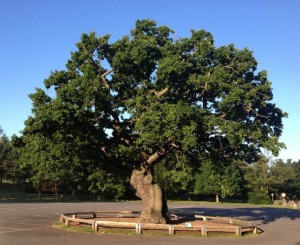 When we talk about old and ancient trees, Britain has been blessed with more than any other country in Europe. By ‘old and ancient’ we mean something lie an old building that is maintained and nurtured because of its historical significance. Buildings are mortar and bricks or stone but a tree is a living entity.

How ancient trees have survived the generations

Consider the way in which man is de-foresting the planet, it’s a wonder that any really old trees have survived. Their chances of doing so in Third world countries is a lot more difficult than in European countries. Community awareness of the trees in the area has grown significantly over the past 35 years and cutting down a tree that has been part of the neighbourhood ever since there were any homes there is simply not allowed. Permission is required.

Many of these trees, going back generations, have been ‘working trees’ in that their wood and leaves were used as part of everyday life. In the days before engine driven chainsaws were able to despatch a tree in mere minutes, chopping down a giant ancient tree was considered far too time consuming. There was a common thought that a tree so old would probably be rotting from the inside so the value of the timber was negligible.

In addition to Yew trees in churchyards, it has always been thought that old and ancient trees gave parks and gardens a majestic quality and an air of antiquity.

Just how do you identify a tree that has been classified as a veteran? Here are

These factors can sometimes appear on damaged trees, such as those harmed by fire. Some veteran trees may have very few of these factors.

The importance of veteran trees

If only trees could talk. We would have been able to put together an amazing history of mankind over the last few hundred years. Veteran trees are often historically linked with significant events. How often do you see an old landscape painting or even a painting of people and the tree in the picture is still alive?

Significant trees are often found to be markers that occur at boundary banks or hedgerows, meaning they contribute to studies on ancient land divisions.

The biggest threat to any tee is felling. The decision to take down what is obviously an historical and veteran tree is not taken lightly these days. While some trees might need expert maintenance to stay alive, some old trees become a danger to the community with low hanging branches or internal rotting that might cause the tree to fall over naturally and damage property. With the legality surrounding the management of veteran trees, the work should be left to experienced contractors who carry tree surgeon insurance.