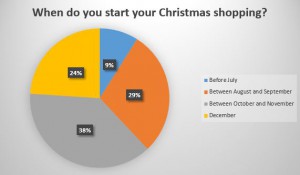 Now that the clocks have gone back and TV adverts are starting to have a more festive feel, it’s time to start thinking about Christmas!

We all tend to spend a bit more at this time of year – whether it’s on presents, decorations, food and drink or travel – but just how much will everyone spend this Christmas?

To find out exactly that, consumer finance website Bobatoo.co.uk commissioned a survey asking 1,000 people in the UK about how much they plan to spend over Christmas 2015.

In terms of other Christmas-related items like food, drink and decorations the most common plan (46% of respondents) is to spend between £200 and £300

Who gets the most money spent on them at Christmas?

Unsurprisingly, children come out on top when it comes to getting the lion’s share of the money spent at Christmas. Bobatoo’s survey found that a massive 70% of people in the UK are planning to spend most of their Christmas budget on children aged between 5 and 16.

Partners and spouses seem to get the least spent on them, with the most popular amount being between £100 and £150. Only 16% of people are planning to spend more than £200 on their other half.

Do you set a budget for your Christmas spend?

The survey found that an overwhelming majority of people in the UK (93%) set a budget when it comes to Christmas spend – but then just 18% of us actually stick to the limit.

Nearly half – 46% – admit to slight going over their budget each year, and 29% say that they always overspend ‘by a huge amount’ at Christmas.

A spokesman for Bobatoo.co.uk said:

“It is clear that, despite the recent recession and periods of economic uncertainty, the UK public show no signs of slowing down when it comes to Christmas spending.

“There is a worrying trend showing many UK consumers overspending at Christmas, which can lead people turning to high interest credit loan agreements to cover the shortfall.”