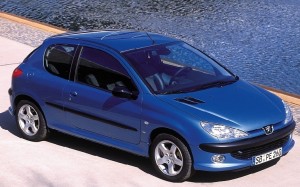 Even with a budget of just £1,000, a respectable used car that’s good for everyday family life can still be found; you just might need to search a little harder than if the budget were more generous. Using the right and plentiful searching tools at your disposal can be a shortcut to finding the perfect motoring partner, and here are five models to inspire your search.

The small, but perfectly formed Peugeot 206 is a great place to start your bargain used car search, with literally thousands of good value examples on the second hand market. The 206 was hugely popular in the UK which means many a cherished – and some not so cherished – models can be found. Click here for some used Peugeot 206 auction bargains.

The little French supermini is stylish enough to look good on the driveway but also rugged and reliable enough not to break the bank when it comes to running costs and servicing. They should also be good on fuel, especially if you pick one with one of the smaller capacity petrol or diesel engines. And not a GTi!

It’s not exactly the prettiest used car on the market, but it’s a tough little chap and very cheap to buy and look after. The Vauxhall Astra sold well in the UK and while it’s not so desirable now, that’s all good for us bargain hunters looking to pay a grand or less for a road-ready set of wheels.

You might find that when compared to other similar models on the market that the Astra’s engines are a little out of date, and as such not quite as frugal on the fuel as some of their cousins. But, for our low price, you’ll get a fairly well specified car that should be reliable, cheap to run and fun to drive.

The Nissan Micra is cute and cuddly to some, and just downright ugly to others. It’s a Marmite car alright, but one that sold in the thousands in the UK thanks to Nissan’s impressive record for reliability and economy.

The curvy Micra is small and nippy; perfect for city dwellers, and if you pick one of the smaller engines from a wide choice of power options, you should be happily surprised by its fuel economy. Drive it gently and the smallest of Nissans could well return the best fuel economy of our bunch.

Not the most flair-some of French cars, but in the right colour and the right trim, the Renault Megane can look good enough with its curvy body and pleasing proportions. But again, cars that perhaps don’t score that highly on pure desirability are the ones that we’ll be more likely to afford with our £1,000 budget.

The Megane is the usual mix of Renault resilience and cheap servicing and running costs, so if you can put up with the sometimes rather bland looks, you could be all the better off as your bargain hunt begins. Engines are decent from an economy point of view; as well as can be expected for the age of the car, and spares and dealer back up are readily available.

Probably the most expensive used car of our little round up, so you’ll have to hunt high and low for one that sits within the £1,000 budget. Harder searching work indeed, but a finely fettled VW Polo for a grand or less will reap the owner many benefits.

Reliability has never been an issue for the compact little Polo and while replacement parts and service items may be a touch more expensive than other used cars you’ll find for £1,000, you should find that the overall higher build quality found in VW products will mean that consumables will last longer in the long-term.