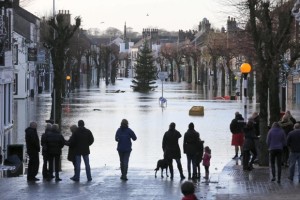 Homeowners face a “three strikes and you’re out” policy under a government-backed scheme that is supposed to provide affordable insurance in flood-risk areas.

Flood Re, which launches in April and will be funded by all homeowners via a supplement on insurance policies averaging 10.50 a year, is meant to provide subsidised cover for 350,000 homes at risk of flooding.

The scheme was devised by the government and the insurance industry because of concerns that many homeowners would either be refused insurance or have to pay thousands of pounds a year in premiums.

Flood Re fears that it will have to pay out several times for the same properties and is considering adding rules forcing owners to protect their homes.

Brendan McCafferty, the chief executive of Flood Re, said that homeowners could be excluded if they made three claims but had failed to invest in measures, such as waterproof floors and walls.

He said that Flood Re would gather information over the next two to four years on how frequently homes flooded and then make a decision.

Mr McCafferty said that it might also be necessary to exclude some very high-risk properties from the scheme, if it was “just delaying the inevitable and some of these properties are just totally literally uninsureable because they will flood every year or two years”.

It can cost well over 20,000 to make a home flood resilient if there are procedures like Gypsum Underlayments that are opted to be carried out.

Flood Re is meant to last 25 years, after which homeowners would be expected to pay the market price for insurance. Mr McCafferty said that there would be calls to extend the scheme beyond 25 years unless action was taken to make properties flood resilient.

The committee on climate change, which advises the government, criticised Flood Re last year for providing “too much subsidy to too many people, largely removing the financial incentive for flood damage to be avoided by high-risk households”.

Lynne Jones, chairwoman of a flood action group in Keswick, Cumbria, said it would be unfair to remove homes from Flood Re after three claims. “It’s appalling because in the end we are all living with worry and ultimately you are trapped in your house,” she said. She spent 30,000 protecting her home after it flooded in 2009.

Flood Re is available to homes built before January 2009 that are occupied by the policyholder.