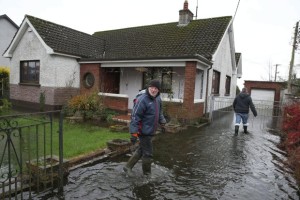 Insurance companies will be confronted by the taoiseach and senior ministers today over their refusal to cover people in flood-prone areas.

With floodwater receding across the country, the true cost of the destruction is only now becoming clear.

Enda Kenny has said that there will be a forthright conversation with insurers, particularly about those who cannot get a home insurance policy despite living in an area where significant flood remediation works have taken place. Insurance companies are expected to resist pressure to insure those in high-risk locations.

“We need to have a very forthright discussion with the insurance companies,” the taoiseach said yesterday. “There is a difference between towns and other areas where defence against flood has been put in place, such as Fermoy and Clonmel. The stories I have been hearing is that people are still unable to get insurance for their homes and businesses. We need to tease that out.

“You cannot have a situation where people are left bereft of cover when flood defences have been put in place at public expense.”

Alan Kelly, the environment minister, said that the government had not yet ruled out the imposition of an insurance levy that would contribute to a fund used to support those unable to access insurance.

“Everything is up for discussion. I am quite conscious that taxpayers already pay two levies but we will be looking at everything on the table,” Mr Kelly said.

Asked if a state-backed issuance scheme was likely, he said it was also under consideration. “Certainly I think it is well worth looking at and it is on the table along with everything else. We will use the discussion to formulate our view and formulate proposals on how to deal with this. It’s not an easy thing to solve but we are determined to solve it.”

Insurance Ireland, which represents insurers throughout the country, is due to meet the taoiseach today and said its members were acting to ensure policy prices do not increase.

“The goal of our members is to provide cover to as many people and businesses as possible and wherever possible,” the group said. “However, the fundamental basis for the insurance business is a pooling system where the premiums of all pay for the losses of the few. Insurers provide insurance calculated on potential risk, not on certainty, and also need to keep costs affordable for all policyholders.”