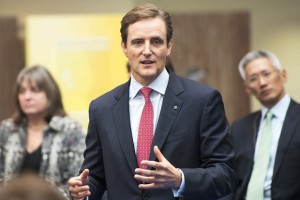 In a world where industries are lining up to convince graduates that they are the most advanced, the most innovative and, best of all, the most exciting, insurance — suited, booted and misunderstood — appears to be falling ever further behind.

“People just see it as rather a grey industry,” Richard Baddon, insurance partner at Deloitte, said as the consulting giant published a new study warning that the industry must address its image if it is to attract the brightest candidates. Women, especially, appear to be giving insurance and insurers a wide berth.

Only 1.3 per cent of 211,000 business students at universities in 30 countries worldwide regarded insurance as one of their top-five career destinations, Deloitte discovered. That compared with 14 per cent for either banking or fast-moving consumer goods, 10 per cent for software and computer services, 8 per cent for auditing and accounting and 5 per cent for the automobile sector.

Deloitte found that negativity about insurance was nearly universal: in no country did insurance gain more than 3 per cent of the votes as a top-five employment destination. Banking, in spite of its serial scandals, garnered 6 per cent in Austria and 31 per cent in China.

Moreover, while women made up 61 per cent of business students, they accounted for only 54 per cent of those students who were interested in a career in insurance.

Even those who did express an interest in the industry seemed to fall short, somehow. Deloitte found that insurers attracted students who tended to lack an innovative mindset. Those looking for a creative, dynamic working environment, opportunities for travel and exciting products or services tended to shun the sector. Insurers tended to appeal to graduates seeking financial strength, a meritocracy, job security and prestige.

Insurers concede they can struggle to attract female graduates. Aviva says that 52 per cent of its workforce is female, but only 36 per cent of its graduate intake over the past eight years have been women.

It says that it is trying to address this shortfall, pushing the company harder as an attractive choice for women graduates.

Mark Wilson, Aviva’s chief executive, said: “Diversity in business is much more than just the right thing to do. It makes clear, hard business sense.”

They, no doubt, like any number-crunching insurer, will be well aware of the statistics that tell their own story about women, graduates and industry — such as the percentage of women in the accountancy profession standing at a meagre 36 per cent in 2014, admittedly up from 34 per cent in 2010, according to a report from the Financial Reporting Council; or the fact that a higher percentage of female graduates (27 per cent) than males (13 per cent) worked in “lower middle skill” jobs such as teaching assistants, care workers and administrative roles.