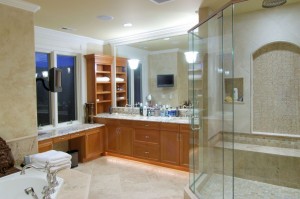 Not all of us have the budget to buy new showers or fit a large jacuzzi in our bathroom. *Sigh*. Oh well, such is life and for those of you (probably mainly students) who have to live with a distinctly mediocre bathroom then there are certain techniques that you can utilize to fix those nagging problems.

This can be totally dependant on the area you live and the subsequent water quality. It is amazing how quickly a shower head can accumulate dirt and calcify. It is also amazing how long you can put up with shower head that definitely operates with less than half of its holes working. Thankfully there is a very cheap and easy way to fix this dysfunctional shower….utilise the power of vinegar. Get some cheap strong vinegar and soak the shower head in it for a good few hours – preferably overnight. Then rub off the offending dirt and grime, wash off the vinegar, and now you can actually have a decent shower. Simple but beautiful. You do not even have to get expensive vinegar – just go down to your local Poundland or bargain store and pick up a 2 litre bottle of cheap (but strong) vinegar. It is not the taste that you want, it is simply high acidity. This technique can also be used for taps that have accumulated lime scale and dirt so there is no longer an excuse for your taps and showers to have lime scale on them.

Some bathrooms have extractor fans that make a hell of a lot of noise but do very little time extracting. This poor performing extractor fan can have disastrous consequences for your shower curtain, especially in the winter when the house if a few degrees colder and everything (not only your towel) takes substantially longer to dry. The shower curtain will trap moisture between the side of the bath and where the curtain rests against it and if your extractor fan or ventilation is particularly bad then your shower curtain may well stay perpetually wet. If this occurs and your house is not incredibly cold then the material can turn a strange orange colour and eventually develop mould. Nice. Even more so if you have custom shower curtains that you put thought into creating, or were a fun gift from a friend – you certainly will want to try and save it from being replaced. There is however a very quick and easy fix to this infestation of mould on your shower curtain: just fill the bath up with bleach, dilute it with a bit of water and submerse the shower curtain in your cleaning concoction. Come back a couple of hours later and voila, a nice pristine shower curtain (you may have to stir it every so often). Just make sure to rinse all the bleach off and give the bath a good clean before you use it!

Sometimes you have to suck it up and replace items. There is only so much that vinegar and bleach can do! This can be especially painful if your finances are in disarray, it can also be a bit of a surprise as to hoe much random items for your bathroom can cost! If you have to replace a bathroom tap or mirror, or even a toilet seat then order it online. Everyone nowadays knows that things are cheaper online, so take advantage of the 21st century and visit websites such as www.homesupply.co.uk. Admittedly you might not be able to hold it in your hands first but unfortunately your budget is the main constraint and they are very tight handcuffs indeed. You don’t have the luxury of buying from some boutique tap maker with a tradition spanning back to the mid 1800’s – so get online and find yourself a bargain!