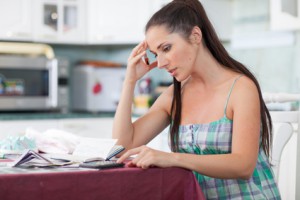 In August it was revealed that the gender pay gap between men and women in the UK had increased for the first time in five years. Since the recession the research claimed that more than 820,000 women have moved into low paid, insecure jobs which have finally widened the pay gap so that now, across all jobs, men earn an average of 19.1% more than their female counterparts.

New research by TotallyMoney.com has shown that alongside this pay gap, there is still a long way to go when it comes to the financial balance of relationships as well. In the survey, 52% of men in relationships believed that they would be financially better off without a partner. On the other hand, only 39% of women thought the same.

But is this down to actual spending habits, financial means, perception, or a bit of all of them?

Now it could well be true that men spend more on their partner in relationships than women. Figures for Valentine’s Day spend seem to back this up with men spending an average of £39.57 and women only £22.64. These figures also seem to support what could be called an ‘old-fashioned’ attitude (on either the man or woman’s part) about the balance of spending within a relationship. A recent survey revealed that 84% of men said that they still paid for most entertainment expenses when out with their partner (even years into the relationship). This was supported (if not completely agreed upon) by 58% of women who said their (male) partner usually picked up the tab when the bill came.

It could also be that these men simply earn more money, or are more financially confident than their partners. The assertion seems to be supported by the 19.1% pay gap.

Yet, despite this year seeing the first rise in the gap in five years, on a longer term scale it’s clear to see that, on average, the pay gap is closing. Yet the pay gap of the past may still be affecting the relationship spent gap of today.

When the results of the survey are broken down by age, a huge 68.8% of male respondents in the 35-44 year old age group claimed that singledom would be more cost effective for them. This stood in stark contrast to the 48.8% of males in the 24-35 age group who thought the same.

This improvement in gender balance could well be due to higher levels of education and qualification in younger females (and therefore younger relationships as a whole), as more women are going to university than ever before. Therefore it may just be that younger women are comparatively higher earners.

It could also mean however, that the gender gap of the past has led to the perception that men are more financially independent than women today.

Whilst it seems certain that women have better money-earning means than ever, it could be said that ‘old-fashioned’ attitudes persist in the older. It may just be that no matter the relationship spend gap, older men may feel more financially confident when single – and older women may feel the opposite.

Either way, it seems that a male bias when it comes to the financial balance of relationships is (at least in the very long term) on the way out, and unless the recent blip continues, the gender pay-gap could follow too.